There are 20 main amino acids that are critical for human biological function and protein synthesis. These amino acids are traditionally grouped into two categories: essential and nonessential. Keep in mind that the terms “essential” and “nonessential” describe the necessity to include these amino acids in the foods we eat.

Some of the nonessential amino acids are described as conditionally essential. This means that under normal circumstances, the body is able to synthesize adequate amounts of these amino acids. However, when the body is under stress – for example, during periods of injury or illness – the body requires more of these amino acids than it can make on its own. So, increasing dietary intake is required during these times.

There is also a growing body of evidence suggesting that for optimal functioning and performance, humans actually do need a certain dietary intake of amino acids that have been traditionally classified as nutritionally nonessential. 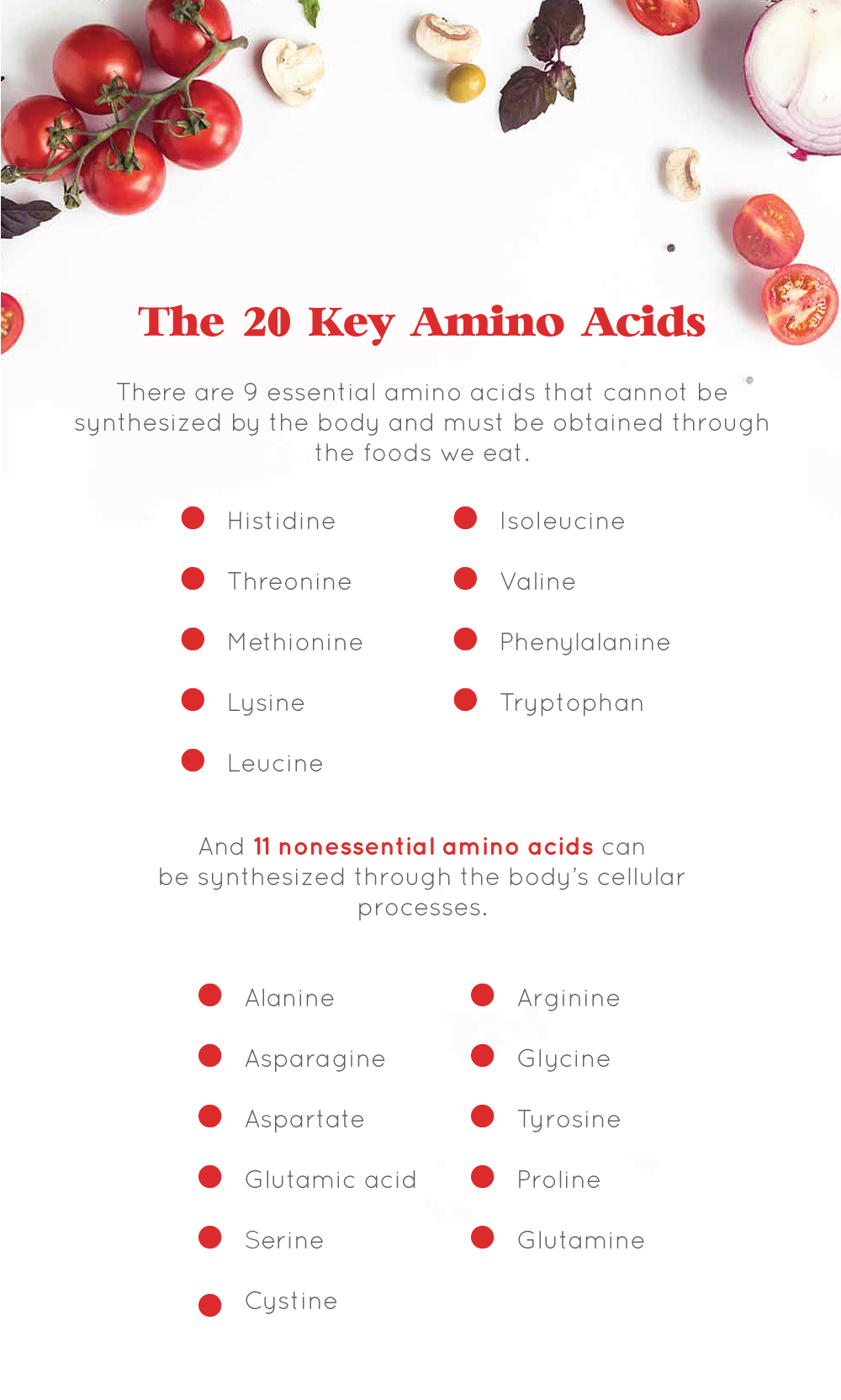 The side chain, or R group, is the part of an amino acid that makes it unique in structure and function. For example, the side chains of leucine and isoleucine contain only carbon and hydrogen atoms, making these amino acids hydrophobic (meaning that they are not attracted to water molecules). Other amino acids, like lysine, have R groups containing nitrogen, making them hydrophilic (meaning they are attracted to water molecules). The properties of R groups have implications for the final protein structure and function.

Your symptoms depend on the functions of the individual amino acids you are missing. If you are deficient in histidine, you may notice skin irritation or rashes. Deficiencies in phenylalanine or tryptophan may result in brain fog, anxiety, and irregular sleep schedule. If you are missing threonine, you may experience digestive issues. Deficits in BCAAs and lysine may exhibit as slow recovery after strength training, muscle soreness, and muscle loss. Low levels of methionine can compromise liver function.

You may have noticed that several amino are used in the production of other amino acids. This has the potential to initiate a domino effect, where a deficiency in one amino acid can lead to the deficiency in another.

So You Think You May Have an Amino Acid Deficiency: What Are the Next Steps?

If you are exhibiting the signs of amino acid deficiency, it’s a good idea to check in with your doctor. He or she will be able to rule out any confounding factors that may be causing your symptoms and administer an amino acid deficiency test that pinpoints the missing amino acid. The next step is to identify the cause of the deficiency and adjust your diet accordingly.

Nutritional imbalances or the presence of an underlying disease can impact amino acid metabolism and synthesis and lead to deficiencies.

Deficiency Due to Lack of Dietary Protein

Amino acids are present in protein-rich foods, and if your protein intake is not high enough, you’re at a higher risk for an amino acid deficiency. Additionally, under conditions like illness, injury, or stress, your body may require and utilize more amino acids than you are consuming and synthesizing. Older adults face an increased risk of inadequate food intake and associated protein deficits.

The Myth Surrounding a Vegan Diet and Protein Intake

A prevalent misconception people often hold is the idea that for a vegan, amino acid deficiency is more likely or even common. However, this is not the case! This misconstrued idea arises from the fact that in isolation, comparing a specific animal protein source like beef to a particular plant protein source like peanuts will reveal that the animal protein will almost always have a complete amino acid profile. On the other hand, with the exception of soy, any one plant protein source does not provide all necessary amino acids for biological functions. However, how many vegans consume just one source of protein throughout the day? A balanced vegan diet rich in fruits, vegetables, whole grains, nuts, beans, and other products like soy will provide a complete amino acid profile.

Deficiency Due to Disease or Illness

A variety of conditions can contribute to deficits in amino acids. Genetic amino acid deficiency disorders are usually diagnosed early in life and impact the synthesis and metabolism of specific amino acids. For example, individuals with phenylketonuria are unable to properly metabolize phenylalanine, which results in dangerously high plasma levels of phenylalanine. A common intervention is to reduce nearly all dietary sources of phenylalanine – however, this often leads to symptoms of deficiency like fatigue, vomiting, and skin rashes.

Liver diseases like fatty liver disease or liver cirrhosis often results in amino acid imbalances, including particularly low levels of branched-chain amino acids. This amino acid deficiency can lead to muscle wasting, and in severe cases, a build-up of neurotoxins in the blood.

In cases of genetic amino acid deficiencies and illness-induced deficiencies, it’s best to first receive medical treatment for the underlying cause, and then make nutritional adjustments to compensate for deficits.

Having adequate amino acid levels is crucial to combatting illnesses efficiently, facilitating proper metabolic functioning, and making sure that you feel your best. If you’re showing signs of an amino acid deficiency, check with your doctor and nutritionist to ensure that your diet is providing all of the amino acids that you need.